The speaker of the Ontario legislature is investigating a complaint by Progressive Conservative MPP Donna Skelly, who claims NDP Leader Andrea Horwath physically assaulted her on Tuesday. 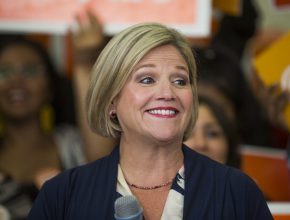 “A number of members witnessed the events which occurred yesterday afternoon,” Skelly told the legislature on Wednesday, “too many in fact for this not to be worthy of further examination by the house.”

The MPP for Flamborough-Glanbrook further explained she was having a discussion with a colleague on her side of the house when Andrea Horwath crossed the floor and came up to her, yelling and screaming and pushed her.

After Question Period Wednesday, Horwath called Skelly’s allegations absolutely not true. “This is nothing more than me having gone over to tap an old colleague on the shoulder, I mean, I’ve known this woman for twenty years and the fact that they’re blowing this up into some kind of scandal just shows how this government cannot resist from being hyper-partisan in the way that they behave. First of all, its despicable, but secondly, it’s unnecessary.”

Because the encounter occurred when the bells were summoning MPPs for a vote, the encounter between Skelly and Horvath was not captured on legislative cameras and there is no audio recording.

Speaker Ted Arnott said he would consider the matter and report back to the house in due course.