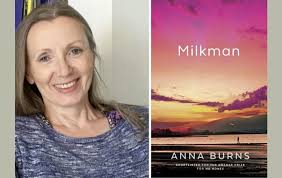 Anna Burns has won the prestigious Man Booker prize for fiction with Milkman – described as a vibrant, violent story about men, women, power and conflict – set during Northern Ireland’s years of Catholic-Protestant violence.

Burns is the first writer from Northern Ireland to win the $66,000 prize – open to English-language authors from around the world. She received her trophy from Camilla, Duchess of Cornwall, during a black-tie ceremony Tuesday at London’s medieval Guildhall.