There’s a half a billion dollar family feud in the works at Magna International in Aurora. 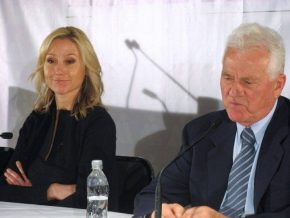 Magna founder Frank Stronach is suing his daughter Belinda Stronach, two grandchildren and others at the autoparts giant for $500-million, claiming they mismanaged the family’s assets and trust funds.

86 year old Frank Stronach and his wife have launched the lawsuit in Ontario Superior Court and say they have done so as a last resort.

In their statement of claim, the Stronachs accuse their daughter, along with the CEO of the Stronach Group Alon Ossip of “having undertaken a series of covert and unlawful actions” that have been contrary to the best interests of other members of the Stronach family.

Also alleged in the statement of claim is that 52 year old Belinda Stronach led an extravagant lifestyle that has drained the company in excess of $70-million, including a new office in Yorkville that cost more than $10-million.

None of the allegations has been proven in court.

Belinda Stronach has denied the allegations and issued a statement:

“Family relationships within a business can be challenging,” “My children and I love my father. However, his allegations are untrue and we will be responding formally to the statement of claim in the normal course of the court process.”