THIRD PERSON HIT BY TTC STREETCAR SINCE BEGINNING OF OCTOBER, TWO HAVE DIED

There have now been three incidents involving TTC streetcars and pedestrians since the beginning of October. 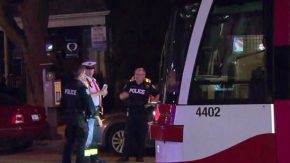 Overnight at 1:30am Wednesday, a man was hit by a streetcar in Roncesvalles Village. The individual was taken to a trauma centre for treatment and is expected to survive.

Monday evening, a man was killed after being struck and pinned by a streetcar on Queen Street west of Broadview Avenue.

And on October 1st, paramedics were called to the Queensway and Ellis Avenue when a man was trapped underneath a streetcar. He was transported to hospital and died four days later.

TTC spokesperson Hayley Waldman says the circumstances were different in each incident and claims it doesn’t indicate a trend.

“It’s very unfortunate that these incidences have happened in very close succession. We really strongly wish that they wouldn’t but it’s not necessarily indicative of a pattern. The TTC takes safety and security of our passengers and of our employees and of the general public of the city of Toronto very seriously,” Waldman explained to CBC Radio.

Back in June, a Toronto Star report revealed that streetcars account for half of deadly TTC collisions with pedestrians and cyclists.