A Montreal based car-share service is expanding to Toronto.

“For some in Toronto, having access to a vehicle for a variety of circumstances would be possible, this pilot has the potential for them to be transformative,” said Mayor John Tory Tuesday morning, following months of debate by Toronto city councillors over how the city would regulate the industry. 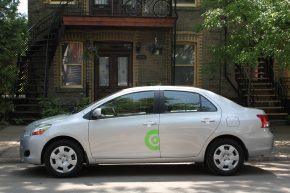 Communauto will be the first member to join Toronto’s free-floating car share pilot. It will offer 200 vehicles starting next month.

Another car sharing service Car2Go pulled out of Toronto this past spring, saying the pilot passed by council in April was overly restrictive. Since then, residential parking restrictions have been eased.

Prior to the release of regulations, Car2Go was instructing customers to park in any legal space, including in residential areas. That angered some councillors and homeowners who live in neighbourhoods where street parking is scare.

Mayoral challenger Jennifer Keesmaat is measured in her reaction to the new car-share service.

“It’s important we continue to facilitate lots of different choices for how people get around in the city,” she said. “But, the most important thing we can be doing is to facilitate transit.”

Keesmaat will be a guest on Zoomer Radio’s Fight Back with Libby Znaimer after Tuesday’s noon news. She and Mayor Tory are also among the candidates taking part in Tuesday evening’s mayoral debate at the St. Lawrence Centre.