This year’s Nobel Peace Prize has been awarded to Doctor Denis Mukwege and Nadia Murad for their separate work against sexual violence as a weapon of war and armed conflict. 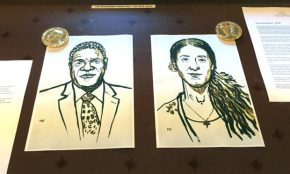 (Drawings of the Nobel peace prize winners Mukwege and Murad on display in Oslo on Friday. Photograph: Nerijus Adomaitis/Reuters)

Doctor Mukwege is a Congolese gynaecologist specializing in treating victims of sexual violence.

Nadia Murad is a UN Goodwill Ambassador for survivors of human trafficking, and is a Yazidi who was a captive of the Islamic State terror group.

The Plight of the Yazidis is the subject of a Vision TV – MZTV production called The New Holocaust.

It exposes mass atrocities by ISIS against the Yazidi people with a focus on the plight of persecuted minorities in the Muslim Middle East.