Members of the U.S. Senate Judiciary Committee are expected to vote this morning on Brett Kavanaugh’s nomination to the Supreme Court. 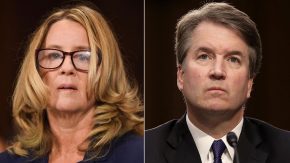 Trump made no mention of the testimony from Dr. Christine Blasey Ford, who also shared riveting details of her claims of sexual assault by Brett Kavanaugh when they were in high school.

“The details of that night that bring me here today are the ones I will never forget. They have been seared into my memory and have haunted me episodically as an adult,” Ford began before revealing her recollection of a time at a party in 1982 when she says she was sexually assaulted by Kavanaugh.

There’s now some high profile push back to Kavanaugh’s nomination.

A statement from the American Bar Association urges the committee and the full Senate to slow down on the vote until the FBI has time to do a full background check on claims of sexual assault made by 3 women in total.

And the magazine of the Jesuit religious order in the U.S. has also publicly withdrawn its endorsement of the Jesuit-educated Brett Kavanaugh.