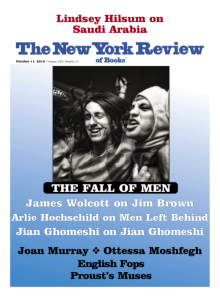 The New York Review of Books is acknowledging its “failures in the presentation and editing” of a much-maligned essay by disgraced former CBC radio host Jian Ghomeshi.

The esteemed outlet says in a statement that Ghomeshi’s piece, Reflections from a Hashtag – was shown to only one male editor – and that most members of the staff were excluded from the editorial process.

It also says the publication “had a duty to acknowledge the point of view of the women who complained of Mr. Ghomeshi’s behaviour” – and didn’t follow usual editorial practices.

Ghomeshi’s first-person essay sparked an immediate outcry when it appeared online September 14th – with many critics questioning why he would be given such a prestigious platform to write an unchallenged piece.

Critics complained the piece wasn’t properly fact-checked and said it was self-serving to a man trying to rehabilitate his image.

Less than a week later, editor Ian Buruma parted ways with the Review – but in an interview with a Dutch magazine – he stood by his decision to publish Ghomeshi’s essay.