With a clear path forward to the October 22nd Toronto municipal election, the nomination period reopens Thursday morning for city council and school board trustee candidates.

A decision from the Ontario Court of Appeal on Wednesday sides with the provincial Progressive Conservatives at Queen’s Park, which means it will be a 25 ward election, rather than 47 wards.

Nominations will be accepted from 8:30 to 4:30 Thursday and Friday, and certified candidates who wish to change wards or withdraw are also required to register their intentions during the same time period.

Premier Doug Ford says he’s pleased with the court decision which puts on hold an Ontario judge’s ruling that his Bill 5 is unconstitutional, but he claims Mayor Tory is also happy, saying “he may have disagreed with the way we did it, but there’s no way he wanted to be down there with 47 councillors.”

Mayor John Tory admits the decision provides clarity for now … and the city and residents need certainty … and need to get past this.

But Tory says he’s not giving up the legal fight in the appeals process and has directed the city’s lawyers to continue to fight. 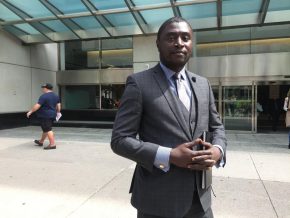 As for City of Toronto co-applicant Rocco Achampong, he told Zoomer Radio’s Fight Back with guest host Jane Brown, his personal legal fight has come to an end.

“I will not be leading the charge to the Supreme Court, that much I can tell you,” Achampong explained.

As a former candidate in the 47-ward scenario, Achampong says he still needs to decide if he’s going to run in a 25-ward city council.