MPPs have wrapped up a rare all-nighter at Queen’s Park, where they debated second reading of controversial Bill 31.

The opposition, led by NDP leader Andrea Horwath, is countering Premier Doug Ford’s mission to pass legislation which would reduce the size of Toronto City Council by nearly half.

“Even kids know that you don’t interfere with an ongoing election and change those rules, and so the fact that this premier has done so cavalierly and has the seals clapping behind him is pretty worrisome,” Horwath told the legislature.

The original Bill 5 was struck down as unconstitutional by an Ontario judge – a move which prompted Premier Ford to invoke the notwithstanding clause in the charter of rights and freedoms.

“We’re going to fix the current dysfunction in the political gridlock that has crippled Toronto City Hall for decades,” Ford told the legislature, “Our plan would replace the broken city hall, one where meetings can last for days and days, and nothing gets done.” 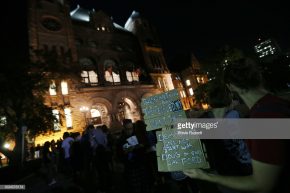 Early Monday morning, the speaker cleared the galleries after rowdy protesters disrupted the proceedings, but that didn’t stop demonstrators from trying to be heard outside. Protesters were not allowed to go back inside.

Following the overnight session, PC government house leader Todd Smith says the plan is to have the legislation passed by Thursday, which would give the Toronto city clerk just over a month for election proceedings to be implemented ahead of the October 22nd vote.