FLORENCE MAKES LANDFALL IN NORTH CAROLINA AS A CATEGORY ONE HURRICANE

As of 8:30am Friday, Hurricane Florence is dumping rain on North Carolina and pushing a storm surge taller than most humans onto communities near the coast. 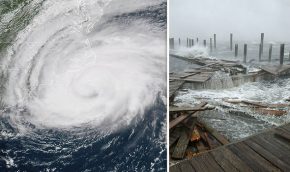 The centre of the eye of the hurricane made landfall in Wrightsville, North Carolina, and was moving slowly westward just south of Wilmington.

Top winds were holding at 144 kph, a Category 1 hurricane, but some communities were already submerged in more than two metres of water as the storm drenched the coast.

Coastal and river communities on the north side of Florence are getting the worst of the flooding as the hurricane swirls onto land pushing a life-threatening storm surge.

More than 415,000 homes and businesses were without power Friday morning according to poweroutage.us, which tracks the nation’s electrical grid.

The barrier island of Emerald Isle is under water, with ocean waves rolling in over a six-foot storm surge and crashing into homes.