CANADIAN TRAVELLERS URGED TO STAY OUT OF HURRICANE FLORENCE'S PATH

Canadians planning to head to the U.S. east coast are being warned by our federal government to avoid travelling anywhere from South Carolina’s Edisto Beach area to the North Carolina-Virginia border as Hurricane Florence approaches.

The government is also warning against non-essential travel to Martinique, Guadeloupe and Dominica because of another Atlantic storm, named tropical storm Isaac.

Toronto-based Porter Airlines is also warning that flights to Newark, New Jersey, could be cancelled too. 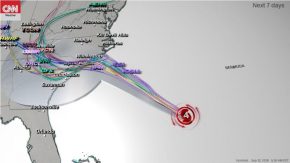 As it churns across the Atlantic with 225 km/h winds, hurricane watches and warnings include the homes of 5.4-million people on the East Coast.

In North Carolina, Duke Energy spokesman Jeff Brooks says power could be out for weeks after the storm makes landfall sometime Thursday night.

North and South Carolina and Virginia have all declared states of emergency.

Forecasters expect up to 600-millimetres (2 feet) of rain in parts of North Carolina,