He says it’s time to embark upon a magical journey with no need to inquire how he spent his summer vacation. 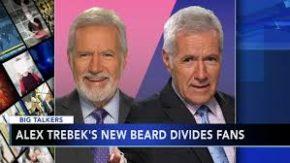 The look has led to a poll on Twitter and there have been more votes for the beard than against it.

One person wrote that the beard reminded her of actor Sean Connery while another compared the 78-year old show host with Santa Claus.

Trebek sported a mustache for years but shaved it off in 2001 and then grew it back in 2014.