A possible way to stop cancer from returning has been discovered by Hamilton researchers.

A previously unknown cell has been found to be responsible when acute myeloid leukemia patients in remission relapse. 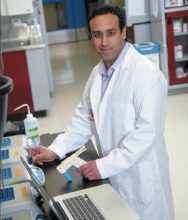 “If chemotherapy was completely effective there would be no cancer cells there at all, so I think that’s been acknowledged for a long time,” Bhatia explains,”I think the surprise was that the chemotherapy was actually part and parcel playing a role if you will, in how the cancer was coming back, so you don’t want to eliminate the chemotherapy, you just want to add to it to prevent it from coming back entirely.”

Bhatia says they now know what they’re trying to kill, they’re just missing that second ingredient in the treatment.

He says these masquerading cells need to be targeted differently than typical cancer cells with new weapons.

Bhatia expects the work will move forward quickly because a number of drugs have already been identified as contenders.