CANADA TO MAKE CONCESSIONS ON DAIRY TO GET NAFTA DEAL: REPORT

Canadian negotiators appear ready to make concessions in order to see through the renegotiation of the North American Free Trade Agreement. 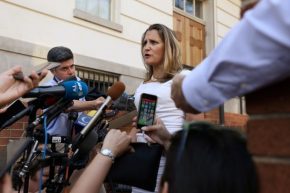 (Canadian Foreign Minister Chrystia Freeland speaks to journalists outside the U.S. Trade Representative’s office in Washington, U.S., August 28, 2018. Sources with knowledge of Canada’s NAFTA strategy said Ottawa will try to deal on dairy in exchange for compromises from the Trump administration on other areas. CHRIS WATTIE/REUTERS)

Chief negotiator Chrystia Freeland arrived in Washington Tuesday, where she had a meeting with chief U.S. negotiator Robert Lighthizer ahead of resumed talks today.

A Globe and Mail report suggests Canadian negotiators will agree to change one rule that effectively blocked American farmers from exporting ultra-filtered milk to Canada and also offer the United States a percentage of the Canadian dairy market.

In return, Canada would keep Chapter 19 which allows the countries to challenge each others’ punitive duties at bi-national trade panels. The system has been an important safeguard for Canadian softwood lumber against U.S. tariffs.

“The dispute mechanism is vital, “UNIFOR President Jerry Dias told Zoomer Radio’s Fight Back with Libby Znaimer, “The only reason we’ve had any peace in the softwood lumber prior to Trump slapping on the latest tariffs, is because of Chapter 19, so I don’t know how you can have a trade agreement with the United States and with Donald Trump without having some sort of a mechanism.”

The U.S. President threatened on Monday to impose tariffs on Canadian made cars and to finalize a deal with Mexico alone, if Canada did not negotiate fairly and agree to a deal by Friday.