The King Street Pilot Project is being credited for increasing TTC ridership, which was up significantly in the morning and afternoon rush periods during May and June. 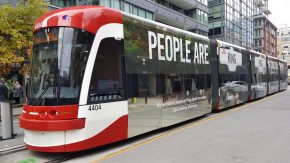 According to new numbers, ridership on the King streetcar line rose by 35 percent during the morning commute and by 27 percent in the afternoon rush hours.

Travel times between Bathurst and Jarvis Streets have also been reduced by approximately 4 to 5 minutes during the slowest commuter periods. City data also shows transit has become more reliable in the downtown core, with 85 percent of streetcars arriving within four minutes during the morning commute.

But restaurant owners in this stretch are not happy, according to Al Carbone at the Kit Kat Italian Bar & Grill on King West.

He says restaurateurs all along the pilot project have seen a decrease in revenue.

“The whole stretch between Bathurst and Jarvis is down,” Carbone complained,”We’re down at lunch, we’re down in the evening.”

The pilot project was launched last Fall with the goal of making public transit more efficient. There is no parking on King between Bathurst and Jarvis, and all vehicular traffic is forced to turn right at every main intersection.