57 years after the fact, the first nude scene screen legend Marilyn Monroe performed, thought to have been destroyed and lost forever, has been found sitting in a safe. 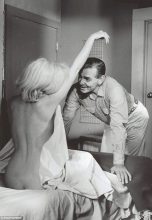 The footage, shot in 1960, was for the movie “The Misfits” which starred Munroe and another screen legend, Clark Gable.

In the scene, Munroe dropped a bed-sheet in what would have been the first nude scene by an American actress in a feature film.  Director John Huston refused to include it in the film saying he thought it “unnescessary.”

The footage was discovered by author Charles Casillo who had interviewed the producer’s son for a new book. Curtice Taylor, son of the producer Frank Taylor, held on to the footage after his father died in 1999.

You can see Munroe’s TV at the MZ TV Museum of Television and Archive at the Zoomerplex in Toronto’s Liberty Village.