What a night it was in Toronto!

Heaviest showers were over the west end of Toronto and near Pearson Airport.

Toronto Police Sergeant Claudio Martelluzzi was on the scene of vehicles that were submerged near Keele and Wilson.

“Just after 9 o’clock tonight we got a call for three cars that were caught in the floodwaters. But fortunately, Toronto Fire got here in time and removed those people. No injuries, we’re happy to report that,” Martelluzzi explained. 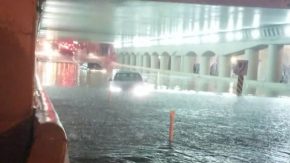 Downtown, the marine unit was called to the area of Lower Simcoe and Bremner at around 11 o’clock to rescue occupants inside four vehicles submerged in water.

Toronto police also mounted a dramatic rescue last night to save two men from a flooded elevator on Black Creek Drive as the city was being drenched by heavy rain.

Toronto Police Spokesperson Katrina Arrogante says the men trapped only had a about a foot of breathing space when they were rescued.

She says the men kept their heads above the water by standing on handrails inside the elevator.

Environment Canada had issued a special weather statement, saying between 50 and 100 millimetres of rain was expected in some areas, particularly near the lakeshore.

The agency said more than 64 millimetres of rain had fallen at Billy Bishop Airport in only two hours.

As for power outages, the Toronto Hydro outage map on Wednesday morning shows all but a couple of pockets have been restored.