Toronto Mayor John Tory has made his first public comments about his main opponent in his a bid for re-election this October. 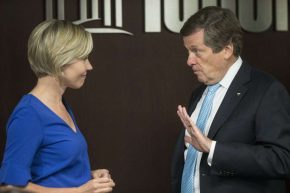 At a news conference on Wednesday when he promised to keep property tax increases at or below the rate of inflation, Tory was asked about Jennifer Keesmaat’s last minute bid to challenge him for his job.

Without mentioning her name, Tory welcomed the former chief city planner to the race, but shared his concerns about an idea Keesmaat tweeted before declaring her candidacy.

“I heard this week, about Toronto seceding from Ontario and it just sounded like kind of a ridiculous idea, and then I read that my opponent slept on it and said it was still a good idea, and I think to myself, it was never a good idea and it was never practical,” Tory said.

But Keesmaat says she decided to run on Friday after Mayor Tory called for a referendum in the face of Premier Doug Ford’s move to slash city council from 47 to 25 wards. She says she was feeling that “Toronto needed to stand up tall and needed to stand up together in the face of the premier’s surprise decision.” Keesmaat acknowledges that her call for Toronto’s secession was a response to that news and not a policy plank, but she clarifies that the largest cities in Canada need more autonomy.