A surprise plan by new Ontario Premier Doug Ford to shrink the size of Toronto City Council is not going over well with nearly half of Toronto residents. 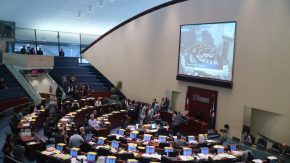 A Forum Research poll also suggests a third are in favour, while the remaining 20 percent of respondents are neutral on the idea or don’t know how they feel about it.

“This policy really hasn’t been sold yet…but (Doug Ford) really has to make a case for this which hasn’t been done yet,” said Forum President Lorne Bozinoff.

Ford’s legislation to cut the size of city council from 47 to 25 is to be unveiled Monday, even though Toronto’s 47 wardd election started May 1st. Experts say a legal challenge to Ford’s council cut is possible but would be difficult. But Toronto Mayor John Tory explained Monday morning that city lawyers are figuring out an approach.

As for the coming mayoral race, 70 percent of Torontonians told Forum Research they would vote for Mayor John Tory if an election were held today, giving him a commanding lead over last minute mayoral candidate Jennifer Keesmat. The former Toronto city planner has the support of 30 percent of survey respondents.

The municipal election is October 22nd.

Have your say about Premier Ford’s proposed changes to city council on Zoomer Radio’s Fight Back. Jane Brown will be your guest host for Libby Znaimer, after Monday’s noon news.