One of the last surviving female spitfire pilots from World War Two has died. 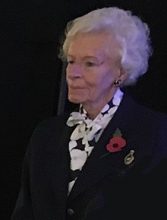 Mary Ellis was born in England in 1917 and was one of a number of women who were trained to ferry war planes from where they were built to the RAF bases where they were stationed.

After the war the Ellis was seconded to the Royal Air Force and continued to ferry aircraft and was one of the first women to fly Britain’s first jet fighter.  In 1950 she became the manager of Sandown Airport on the Isle of Wight and Europe’s first female air commandant

In 2016, Ellis published her autobiography: “A Spitfire Girl: One of the World’s Greatest Female ATA Ferry Pilots Tells Her Story.”