SON OF MEL LASTMAN CHANGES MIND, DECIDES NOT TO RUN FOR TORONTO MAYOR

Turns out, Blayne Lastman is not going to be running for Toronto’s mayor. 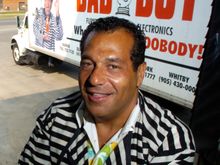 The son of former Toronto mayor Mel Lastman says he will not be a candidate for mayor in the October 22nd municipal election.

Blayne Lastman was expected to make an announcement Thursday morning that he would run, but in a statement this morning, he says he’s decided not to run after careful consideration and consultation with his family. Lastman went to say the last week has been “an emotional roller coaster” and while he is overwhelmed by the support he’s received, his decision not to run is in the best interest of his family, business and the city.

The younger Lastman is best known for running the Bad Boy furniture and appliance empire his father started in 1955.

So far 21 candidates have entered the mayoral race, including current Mayor John Tory who is running for re-election.