MEXICO AND CANADA STICK TOGETHER OVER NAFTA

Mexico is reassuring Canada that it has no plans to sign a two-way trade deal with the United States. 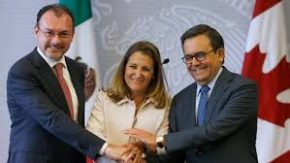 After the meeting Freeland said she was “hopeful” the NAFTA talks could now move into  high gear.