DANFORTH PACKED WITH MOURNERS FOR WEDNESDAY EVENING PROCESSION AND VIGIL

Mourners came out to the Danforth Wednesday night for a vigil to honour the victims of Sunday night’s mass shooting.

A moment of silence was held, and a rendition of Leonard Cohen’s Hallelujah brought many in the crowd to tears. 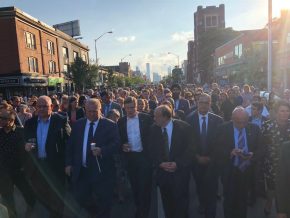 Hundreds of people took part in a procession along Danforth Avenue in the heart of Greektown, where a 10 year old girl and an 18 year old woman were fatally shot and 13 people injured. Toronto Mayor John Tory and Ontario Premier Doug Ford were among those who took part.

There are multiple reports quoting unnamed police sources that the gunman then killed himself following an exchange of gunfire with police. This information has yet to be confirmed by the Special Investigations Unit probing his death.

There is also new information about the deceased suspect.

According to a former classmate and friend who spoke with CTV News, Faisal Hussain’s behaviour was concerning, even in high school.

“I had him on Facebook,” the unnamed woman explains, “and he would post pictures of guns, he would talk about beating up his mom, and I reached out to him and I said to him, that’s super inappropriate and I really hope that these are just lyrics and you’re not really meaning these things.”

A unnamed teacher from the same school says he had to call police after a conversation with Hussain, who said he wanted to kill someone when asked what he wanted to do with his life.

The teacher reported the conversation to the principal, who in turn called the police who investigated Hussain under the Mental Health Act.

Police have yet to confirm a motive for the shooting, but Police Chief Mark Saunders said Wednesday there is no information yet to suggest the killer was linked to ISIS, after the Islamic State terror group made a claim of responsibility for the attack.