The death toll in an outbreak of twin wildfires around Athens, Greece has now risen to at least 60 after the fires tore through popular seaside holiday resorts. 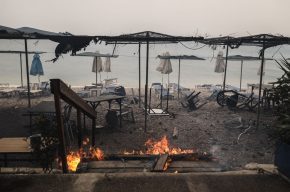 Fire department spokeswoman Stavroula Malliri added that 156 adults and 16 children have been hospitalized with injuries. Eleven of the adults are in serious condition.

Malliri said Tuesday that strong winds have fanned the flames, with the fires spreading rapidly into inhabited areas, preventing people who are in their homes or in their cars from managing to flee.

Greek Prime Minister Alexis Tsipras has declared three days of national mourning. Many people fled to beaches, with some swimming out to sea to escape the choking smoke.

“Today Greece is mourning, and in memory of those who were lost, we are declaring a three-day period of mourning,” Tsipras said. “But we mustn’t let mourning overwhelm us, because these hours are hours of battle, unity, courage and above all solidarity.”

Both Turkey and Spain have sent fire fighting aircraft to help battle what’s become the country’s deadliest fire season in more than a decade.

And Italy is offering two Canadair aircraft to help Greece battle the wildfires.