Three months after the van attack on Yonge Street, Toronto is once again making headlines around the world because of an incident involving a lone suspect and mass casualties. 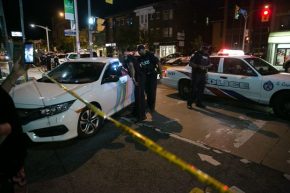 It happened Sunday night on The Danforth in Greektown near Logan just after 10 last night.

A woman has been shot and killed, along with a 29 year old man police say was the shooter. Thirteen other people were injured, and one of those people has since died.

Cell phone videos show what witnesses are saying, that a man dressed in black walked along the sidewalk, intermittently firing into various establishments.

The Danforth will be closed to traffic between Broadview and Carlaw until at least noon on Monday.

“There was an exchange of gunfire. I’m glad that my officers are safe and I’m glad that it was resolved. I’m not happy that quite a few people that have been victims of gun play, which is why we have so many resources that are here,” Chief Saunders explained.

The Chief also says at this point, investigators are still trying to figure out a motive.

Toronto’s mayor was also on the scene of the mass shooting on The Danforth. While appealing for calm, John Tory also restated that there is an escalating problem.

And local city councillors, including Mary Fragedakis and Paula Fletcher were out expressing their shock at what happened.

“This is The Danforth. Sunday nights there are families, they walk on The Danforth in the Summer and for this to happen is just a major tragedy. People are in shock in this neighbourhood and will be for awhile,” Fletcher lamented.

It was April 23rd when a man drove a van erratically down Yonge Street south of Finch Avenue, hitting pedestrians with his rented vehicle, killing 10 people and injuring 16.