The doctor who served as a part time coroner in Woodstock, Ontario, maintains he didn’t miss anything in his investigation into the deaths of 2 of Elizabeth Wettlaufer’s victims. 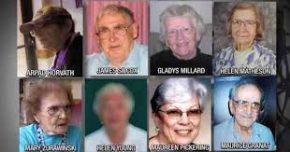 Dr. William George, testified yesterday at the Wettlaufer Inquiry in St. Thomas about his findings in the deaths of 84 year old James Silcox in 2007 and 79-year old Maureen Pickering in 2014, and under cross examination was defiant that he did nothing wrong.

The inquiry heard that George was told by two nurses that the deaths may not have been natural. Out side the inquiry, Lawyer Susan Fraser called the Doctor’s testimony astonishing.

Silcox and Pickering were residents of the Caressant Care nursing home in Woodstock.  Both died after Wettlaufer injected them with massive amounts of insulin. Neither was flagged for an autopsy by the coroner.  In the Silcox case, it was Wettlauffer herself who signed the death record and called it an “accident” and “sudden and unexpected.”