Eight years after its completion, a new study appears to show that the St. Clair Street Car Right of Way build, is doing exactly what is was supposed to do. 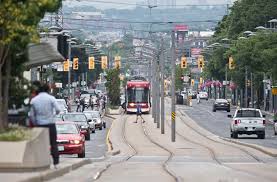 The report shows deceased car traffic between Yonge and Weston Road, increased pedestrian and bicycle traffic and a 7% boost in transit use.

The St. Clair Street Car right of way project, which reduced vehicular traffic to one lane in each direction, was completed in 2010.  It took five years to build and finished millions of dollars over budget.