The 12 boys and their soccer coach who were rescued from a cave in Northern Thailand last week have demonstrated that they are in good health. 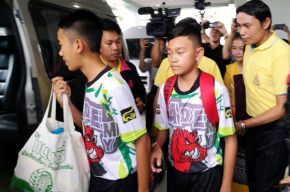 At a news conference after leaving the hospital in Chiang Rai, the boys wore their uniforms and showed off their ball handling skills before sitting down to talk to reporters.

One of the boys said the ordeal has taught him to be patient, strong and not discouraged while others said the team is very grateful to the Thai Navy SEALS who rescued them. The boys also paid tribute to the diver who died during preparations for the rescue mission.

And they spoke about the delights of their favourite foods, after living without nourishment for more than two weeks.

Doctors say the 13 are healthy in body and mind and have gained back about two-thirds of the 9 lbs they each lost.