The Doug Ford Progressive Conservatives at Queen’s Park are being criticized for sending mixed messages on sex education. 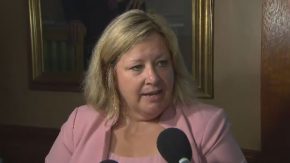 Last week, it was announced that teachers in this province will revert to the 1998 curriculum.

But Monday afternoon, Education Minister Lisa Thompson explained that issues of consent, gender, same sex relationships and cyber safety would still be taught this fall, even though those elements are not included in the old curriculum.

“As we said last week, we are going to be preparing our students and supporting them for the realities of 2018 and we’re going to be embracing what was being taught in 2014, but we are going to be taking a look at specifically a campaign promise that we made to review and consult on the sex ed component of the overall curriculum.

Thompson explained that the portion of the curriculum to be replaced deals with “developing sexual relation”.

In response, NDP Leader Andrea Horwath calls it reprehensible and irresponsible that the new government has left everything in such disarray.

During the recent election campaign, Doug Ford promised to revisit the sex ed curriculum. Critics saw this as a concession to his social conservative supporters who oppose pro-choice rights and same sex marriage.