British comedic legend John Cleese has announced he’s leaving England and heading for a new home in the Caribbean because he just doesn’t trust the British Press anymore. 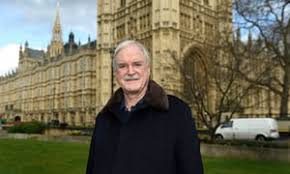 Cleese, who made his name with the legendary Monte Python Comedy Troupe and in classic TV programs like “Fawlty Towers,”  points to the annual European Union survey of most trusted print media.  It has England placed dead last out of 33 countries for the fourth year in a row.  The Netherlands tops the list.  Albania comes a curious second.

Cleese is planning to take residence on Nevis; a small island that forms part the Leeward Islands in the West Indies, and which is separated from St. Kitts by a 3-km channel.   Nevis has about 12,000 residents.  English is the official language and the literacy rate is 98% which places it among the highest in the Western Hemisphere.