The latest installment of JK Rowling’s “Cormoran Strike” novels is confirmed for release in September. 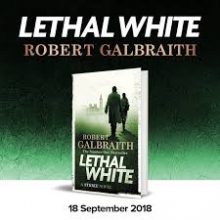 “Lethal White” is the 4th work by Rowling, written under pseudonym Robert Galbraith.

The three previous Galbraith books have sold more than a million copies with the first, “Cuckoo’s Calling,” only selling about 1,500 copies before Rowling was outed as the author.

“Lethal White” will again follow the private investigator Strike and his assistant as the pair investigates  a crime witnessed by a “troubled young man.”  A twisting trail then leads them through the back streets of London, into a secretive inner sanctum within parliament  and to a beautiful, but sinister, manor house deep in the countryside.