The glittering, seemingly eternal French entertainer, who became a cabaret star in Paris, a pal of Marlon Brando’s in Hollywood and the Tony Award-winning muse of Tommy Tune on Broadway, has died at the age of 85. 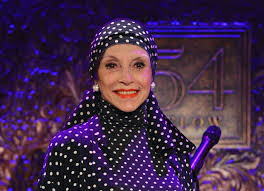 Liliane Montevecchi won the 1982 Tony for best featured actress in a musical for her portrayal of a movie producer in the Broadway production of “Nine.”

Liliane Montevecchi has been suffering from colon cancer.