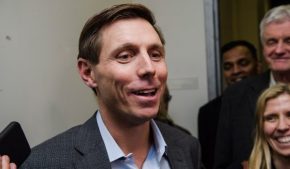 The embattled former leader of the Ontario Progressive Conservatives is taking a run at the now elected position of Peel Region Chair in this fall’s municipal vote.

Brown told Zoomer Radio’s Fight Back with Libby Znaimer, it’s an opportunity to implement good ideas regardless of party.

“You know I was always a big fan of Bill Davis. He was my favourite premier, I think Ontario’s greatest premier. And his approach was collaborative, never overly partisan. And frankly, that’s how I was. I used to say in the legislature, there’s no monopoly on a good idea. It doesn’t matter if it comes from a Liberal, a New Democrat, a Conservative, we need to do whatever’s best for Ontario,” Brown explained. And Brown says the beautiful thing about municipal politics is that there are no partisan allegiances. Bill Davis was Ontario premier from 1971 to 1985.

Patrick Brown was forced to resign as PC leader back in January, after he was accused by two women of sexual misconduct. He is now suing CTV News for reporting what he says are baseless allegations. Brown has a book coming out on November 1st called Take Down which he says is about his political assassination.