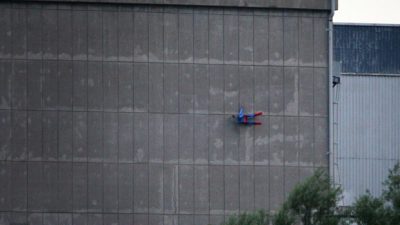 Greenpeace activists say they have crashed two remote-controlled aircraft – a drone and a tiny radio-controlled plane – into a French nuclear plant – to highlight the lack of security around the facility.

The drone was decorated like a miniature Superman – and slammed into the tower at the plant – 30 kilometres from Lyon.

The environmental group says the aircraft were harmless – but their actions exposed the lax nuclear security in France – where atomic power is used for about 75 per cent of the country’s energy needs.

Last week, 19 Greenpeace activists were given suspended sentences – for breaking into another nuclear plant in November 2017.