The prolific and pugnacious author of more than 50 books, 1,400 articles, essays, scripts and screenplays, has died at the age of 84. 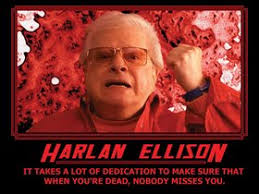 Harlan Ellison had a career which spanned more than half a century.

He was the screenwriter of the movie “Dune” and contributed to TV series including “The Outer Limits,” “Star Trek” and “Babylon 5.”

While, Ellison was best-known for science fiction, his writing spanned mysteries to comic books to newspaper columns.

One of his best-known works was “A Boy and His Dog” which portrayed a world devastated by nuclear war and fought over by vicious gangs.