DOUG FORD SET TO BEGIN HIS GOVERNMENT 'FOR THE PEOPLE', OFFICIAL SWEARING IN FRIDAY

Doug Ford is set to officially become the 26th premier of Ontario on Friday, after leading his Progressive Conservatives to victory in the provincial election on June 7th. 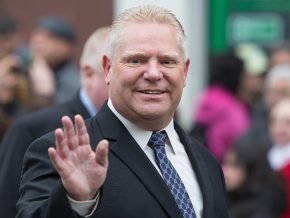 Ford is scheduled to be sworn in just before 11am alongside members of his cabinet, which he has suggested will be smaller than the outgoing Liberal team under Kathleen Wynne.

Doug Ford will then hold a second, public ceremony at nooon on the steps of the legislature, during which he’s expected to reaffirm his oath of office and give a speech.

It is the first transition of power between parties in Ontario in nearly 15 years, since the Progressive Conservative government of Ernie Eves made way for the Liberal government of Dalton McGuinty.

The Tories won a majority in this month’s election, which also saw the outgoing Liberals reduced to seven seats and the New Democrats elevated to official Opposition status.

Ford is a former Toronto city councillor who took over the PC’s earlier this year from the disgraced Patrick Brown.

He has not yet said when he will recall the legislature but maintains he wants to start working on his plan for the province quickly and has already set the wheels in motion on several of his proposals.