HAPPY 70TH BIRTHDAY TO THE LP

Believe it or not, a staple in every Zoomer’s record collection, the LP, is 70-years old 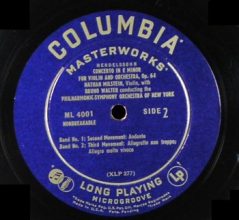 According to an ancient Columbia Records catalogue, the very first 12 inch long play  record was of Mendelssohn’s Violin Concerto in E Minor.

The LP was introduced in New York, May 18th, 1948, and replaced the 10-inch 78 RPM record which had dominated the first 50-years of recorded music.

Those records were made of shellac bound together with cotton fibre and limestone dust and could be as fragile as fine china. The audio wasn’t great either; the records were mono, got scratchy quickly and wore out after some 125 plays.

The advance to the LP was made possible by poly-vinyl chloride which was developed in 1920’s by the BF Goodrich Tire company and which only became readily available after the second world war.