Environmental advocates are criticizing a plan by incoming premier Doug Ford to scrap the province’s cap and trade program as his first act in the legislature.

Keith Brooks at the Toronto based advocacy group Environmental Defence says “this means no more money to help businesses become more energy efficient, no money for social housing energy retrofits and no money for colleges, universities and hospitals to reduce their energy use.”

Cap and Trade accounted for around $1.9 billion in revenue last year. Under the current legislation, revenue was invested in programs that reduce emissions and help businesses and consumers adapt to a low carbon economy. 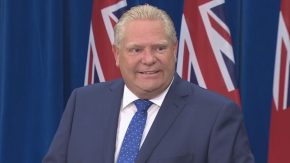 Ford is also promising to cut gas prices in Ontario by ten cents a litre while getting rid of the fuel tax.

Currently, municipalities in Ontario receive two cents a litre on gas that is taxed under the provincial fuel tax to help fund their public transit networks. That figure is set to increase to four cents a litre by 2021. But Ford has said municipalities won’t see a decline in that money despite the promised reduction in the gas tax.

Listen for more on what a carbon tax-free Ontario will mean on Zoomer Radio’s Fight Back with Libby Znaimer after the noon news.