U.S. President Donald Trump and North Korean leader Kim Jong Un have signed a joint document in which they commit to working toward the “complete denuclearization of the Korean Peninsula.” 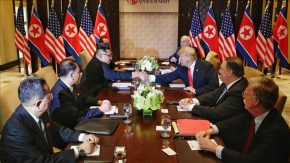 “I think we will do it as fast as we can scientifically and as fast as it can be done mechanically,” Trump told a post-signing news conference before leaving Singapore, “We will be stopping the war games, which will save us a tremendous amount of money.”

The document signed today also includes a commitment to recovering the remains of U.S. military personnel missing in action and presumed dead from the Korean War.

“I left and it was very friendly. When I got onto the plane, I think that Justin probably didn’t know that Air Force One has about twenty televisions, and I see the television and the news conference he’s giving about how he will not be pushed around by the United States, and I thought, we just shook hands, it was very friendly.”

Trump followed up that comment by saying that countries cannot continue to take advantage of the U.S. on trade.

The president also discussed the viral photo taken of German Chancellor Angela Merkel and others standing before him.

Trump says it was snapped as they waited for changes he’d requested to the communique he ended up pulling out of after the G7.

Trump says it “didn’t look friendly but it was, very friendly.”