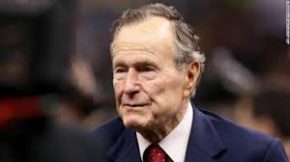 George Sr., is relaxing at his home in Kennebunkport, Maine, eight days after being released from a hospital where he was treated for low blood pressure.

Several of Bush’s children are in town, including former president George W. Bush.  However, the 41st US President is spending the summer in Kennebunkport without his wife of 73 years.  Barbara Bush died this past in April at age 92.