VAN GOGH SELLS FOR OVER $8 MILLION 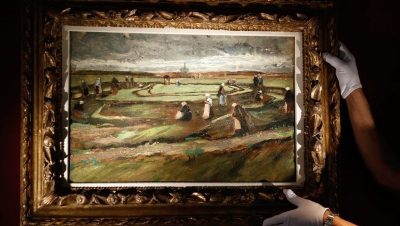 An early landscape by Vincent Van Gogh has sold for more than $8 million at an auction in Paris.

Fishing Net Menders in the Dunes was painted in 1882 by the impressionist master – and depicts peasant women working on the land – a work inspired by the countryside around The Hague in the Netherlands.

It was purchased by an American collector – after a bidding war that pushed the price above its estimate of $3.5 to $6 million dollars.

The painting is the first Van Gogh to be auctioned in France for more than 20 years – and it was the only landscape that the artist produced at the time.