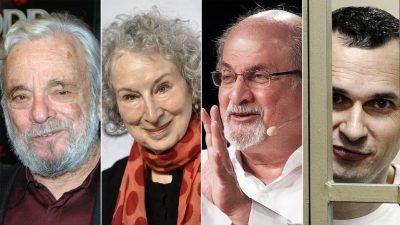 Margaret Atwood, Stephen Sondheim and Patrick Stewart are among dozens of famous artists and journalists calling for the release of Ukrainian filmmaker and dissident Oleg Sentsov.

Sentsov is a critic of Russia’s annexation of Crimea.

He is serving a 20-year term on terrorism charges. The 41-year-old has been on a hunger strike for three weeks – demanding the release of 64 Ukrainian political prisoners – but he is not calling for his own release.

In a letter released Monday through PEN America, the artists called on Russian President Vladimir Putin to free Sentsov. They wrote that the upcoming World Cup games in Russia would heighten scrutiny of the country’s human rights abuses – and freeing Sentsov would make a “powerful statement.”

Others signing the letter include Christiane Amanpour and Jonathan Franzen.