GO TRAINS AND UP EXPRESS RUNNING AS USUAL, CP RAIL STRIKE DOES NOT AFFECT GTA COMMUTERS

CP Rail’s more than 3000 train operators are on strike, but a second group of workers expected to join them on the picket lines is still on the job with a tentative contract.

And this is good news for GO Train and UP Express commuters in the GTA.

There were concerns that commuter trains in the Toronto area would be affected by a strike, but Teamsters reps say those services are run by Bombardier and Teamster members who operate those trains are not on strike.

This was confirmed first thing Wednesday morning by Anne Marie Aikens at Metrolinx, who says it’s business as usual at GO and UP Express. 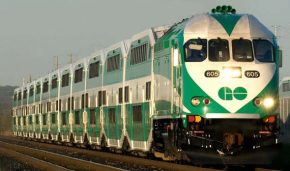 “Your trains are operational, nothing has been changed as a result of that. Go to your trains,” Metrolinx Spokesperson Anne Marie Aikens explained.

Teamsters Canada Rail Conference workers walked out at 10 o’clock Tuesday night, even as talks continued with the help of federal mediators.

That announcement came just minutes after a statement from CP Rail said a tentative deal had been reached with the union representing about 360 signalling workers who were also ready to walk out at 10pm Tuesday.