Yonge Street in North York was transformed into a place of mourning last night. 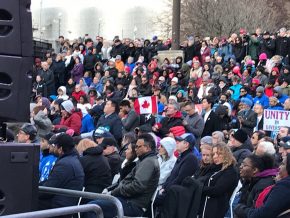 Following a march along the path of last week’s deadly van attack, more than 20,000 people attended a Toronto Strong vigil at Mel Lastman Square for the victims.

Religious leaders led the speakers’ list, all of them sharing messages of support and strength in the face of the tragedy that left 10 people dead and 16 injured.

“We must remember these killings and the carnage, but we must remember to also turn to life and toward each other. Let us reclaim Yonge Street, bring caring and kindness to all of our streets. Take lunch time walks, cheer for our teams, celebrate the graduations to come, and dance at the weddings that are ahead, said Rabbi Baruch Frydman-Kohl to the gathering.

The eight women and two men killed ranged in age from 22 to 94, and by last evening a city-organized fundraiser for victim’s families had raised more than $1.8 million.