It turns out the cryptic numbers in the Facebook post (C23249161) attributed to the van attack suspect Alek Minassian are the same as his service number with the Canadian military.

Minassian was in the Canadian Armed Forces for two months last year, but did just 16 days of recruit training before he asked to be released. 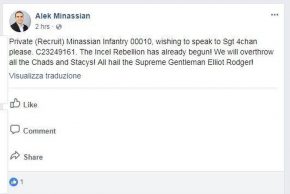 On Monday before the horrific van attack on Yonge Street in North York, Toronto Star reports that a post apparently made by Minassian referenced the identification number assigned to him by the military and an “incel rebellion” while invoking U.S. mass murderer Elliot Rodger.

Incel refers to the involuntarily celibate or men who feel frustrated by their inability to find romantic relationships or sex.

Taylor Neill is the head of Media Technologies at ZoomerMedia and says these frustrated individuals can easily find company online.

“Unfortunately, these guys can get together on a forum and continually talk about it becomes a bit of an echo chamber,” Neill told Zoomer Radio’s Fight Back with Libby Znaimer,”On top of that we’re dealing with a surplus of online trolls that encourage this behaviour and a lot of these users may have mental issues and they’re susceptible to this type of encouragement.”

In the Facebook post on Minassian’s profile, the final message is directed at Sgt 4chan, a reference to an online message board that has become notorious for its association with trolling culture and far-right views.

We are also learning from a Toronto Sun report that Minassian is showing no remorse for the crimes he’s charged with committing, and remains committed to Elliot Rodger’s cause and that he wanted to be shot by police and had looked up on the internet, “death by cop.”

Minassian is charged with 10 counts of first degree murder and 13 counts of attempted murder, with a 14th charge expected soon, in Monday’s van attack.

NEW MATERIAL ON THE WAY FROM "THE SHAT"