YONGE STREET IN NORTH YORK SLOWLY GETS BACK TO NORMAL, AS MOURNERS HONOUR THE VAN ATTACK VICTIMS

The Toronto sign was dimmed for another night. In Niagara Falls, white lights shone Tuesday evening on both the Canadian and American falls, even the lights atop the Empire State Building in New York City were darkened – all in honour of the 10 people who died and the 14 injured in the Toronto van attack on Monday.

Tuesday night, a silent vigil was held at the Yonge and Finch memorial site in Olive Square where people came out to pay tribute to the lives lost and provide comfort to their families.

City life on that stretch of Yonge Street in North York is a little more normal today. Traffic is now moving through the area and the North York Centre subway station has reopened.

While Ontario’s chief coroner expects formal identification of the victims of the Toronto van attack will take days longer, some loved ones are releasing names. 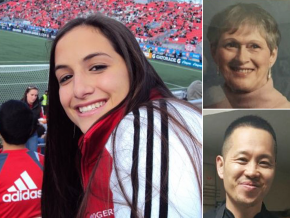 Her family confirms 80 year old Dorothy Sewell was among those killed on Monday, in addition to 25 year old Anne Marie D’Amico who worked at Invesco and was an avid volunteer with Tennis Canada. Other victims include Chef Eddie Kang who worked at the Copacabana Brazilian Steakhouse on Adelaide near Duncan downtown, a female student from Seneca College, two South Korean nationals and Jordanian man visiting family.

25 year old Alek Minassian of Richmond Hill is in custody after making his first court appearance at the Finch Avenue courthouse on Tuesday morning. He’s charged with 10 counts of first-degree murder and 13 of attempted murder, although police expect a 14th attempted-murder charge would be laid soon.

As for the motivation behind this horrific crime, a former strategic analyst at CSIS says the last Facebook post apparently made by the suspect was telling.

Phil Gurski explained on Zoomer Radio’s Fight Back with Libby Znaimer, it was up to fellow social media users to flag this.

“The guy’s got to have friends or followers, whether it’s on Twitter or Facebook, so if you posted that and I’m following along on Twitter, my first call is the Toronto Police to say this is what I just read online. This guy has snapped, he’s lost it and he’s going to do something,” Gurski explained. Listen to the full podcast here.

The post in question was fashioned as a military style report for duty praising Elliot Rodger, who killed three men and three women in the U.S. in 2014 saying he wanted to punish women for rejecting him.