IS THERE A WALKMAN REPAIRMAN IN THE HOUSE?

Here’s a story that’s going to make Zoomers of a certain age feel positively ancient. A 20-year old St. John’s woman is seeking someone, anyone, who can fix her late grandfather’s Walkman. 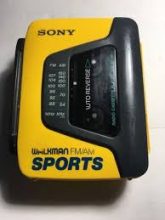 Naomi Russel says she got to use it a few times before he died and thought it was cool.  She even bought an old Foreigner cassette tape to play.

Russell says she collects old cameras and older forms of music players, like an iPod Nano.  But, she’s really hoping the bright yellow Sony Sports Walkman can be fixed so she can clip it to her belt the way her grandfather did, way back in the 1980’s.

She’s posted an ad on Facebook looking for help.