John Lennon’s son Julian is being recognized more more than his musical talent. 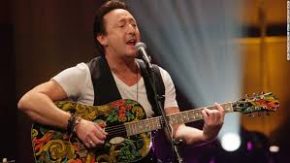 The 55-year old son of the late Beatle has just released the second of his trilogy of books to educate children about saving the planet.

Appropriately, “Heal The Earth” was published yesterday on “Earth Day.”

It’s about a group of children flying around the world learning about saving coral reefs and planting gardens and trees.

His previous book was “Touch the Earth.”  The next one, due out on Earth Day next year will be titled “Love The Earth.”