Barbara Bush is being praised for her devotion to her country, family and literacy.

It was announced on Tuesday evening that the former U.S. first lady had died at the age of 92.

A message on Trudeau’s Twitter account reads, “Always a friend to Canada, Barbara Bush leaves a legacy of dignity, grace, service and devotion to family.”

Trudeau said he and his wife Sophie send their deepest condolences to former presidents George H.W. and George W. Bush, their family, and to all Americans.

Right up to the end, Barbara Bush controlled her own destiny. She waved off her doctors, opting to die at her home in Houston. 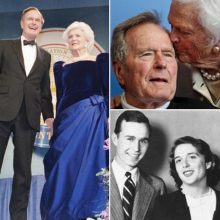 She was there by his side throughout his life, and former U.S. President George H.W. Bush was there beside his beloved at the end of hers.

The 93 year old patriarch of the Bush family is “broken-hearted” over the loss of his wife of 73 years, Barbara Bush. His long-time chief of staff Jean Becker sent out a statement on Tuesday night following Barbara’s death.

“So many of you are asking, “How is 41?” (A reference to the 41st U.S. President) he, of course, is broken-hearted to lose his beloved Barbara, his wife of 73 years,” Becker wrote. “He held her hand all day today and was at her side when [she] left this good earth.” Their marriage is the longest of any U.S. President.